Let’s Talk About You

Ready to get your own videos professionally produced? Let BuzzMasters help!

How You Can Make Your B2B Corporate Videos More Inspiring

How You Can Make Your B2B Corporate Videos More Inspiring

3 Tips to Make Sure Your Video Content Is Top-Notch

3 Tips to Make Sure Your Video Content Is Top-Notch

It’s easy to get caught up in a great video. One that captures your senses from the moment the picture appears on screen and holds you until the very last credit roles. With any luck, you might just be thinking of what you’ve seen as you go about the following days, the concepts, ideas or even pure enjoyment marinating in your brain for the days following.

It’s so easy to get caught up that you may not even see the hundreds of tiny decisions made by the video producer to create the engagement that has so effectively pulled you in, particularly when it comes to light and colour. And as with everything in life, it is the commitment to the little details that will set you apart from the others.

Lighting is definitely important. Anyone who watched the final season of Game of Thrones can tell you that. (Game of Thrones. Produced by David Benioff and D.B. Weiss, HBO, 2011-2019.)

But the fact that the most expensive show of all time didn’t get it right ought to show that it isn’t about money. So will these two images. 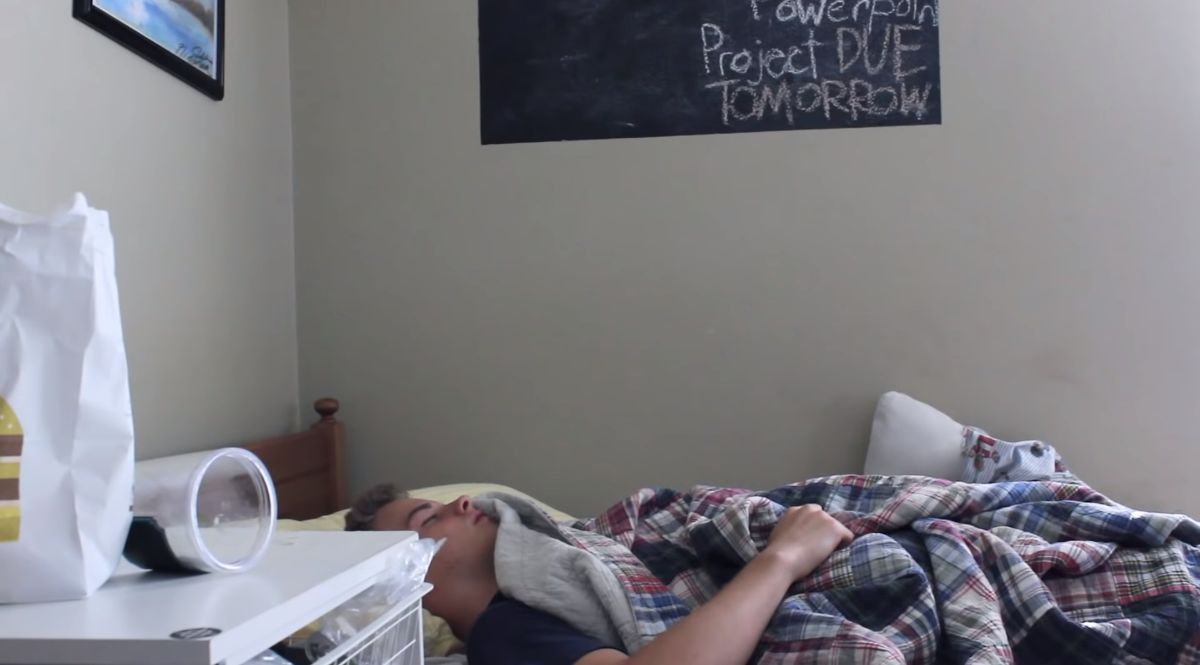 Both are shot with a DSLR. One is from a professional, one is a student film.

What you may not expect is that the top photo, bright and easy to view, is the student shot film.

However, there is another element to consider. It is the element that takes your eye directly to the centre of the darkly-lit still, the strong point of red from the flashlight bulb. It is the element considered in everything from props and costumes to the sets and shot compositions.

And not quite in the way you would expect.

It’s easy to assume that the best colour for a video about a doctor’s office should be white. Clinical, clean, bright, professional. Everything you want a doctor to be. But if you are a community doctor, a pediatrician, someone who wants their patients to feel the utmost comfort during their healthcare services, perhaps a sunny yellow and sky blue might be better?

Schemes are chosen from the beginning, and not just to convey simple ideas but complex, narrative meanings as well. They allow a filmmaker to build an idea by showing it, rather than telling it.

Schemes are chosen from the beginning, and not just to convey simple ideas but complex, narrative meanings as well. They allow a filmmaker to build an idea by showing it, rather than telling it. Click To Tweet

Two wonderful but somewhat opposite ideas of this are Pleasantville, and The Sixth Sense.

The colour red is especially important to these films. When it appears, it indicates something is happening and their repeated nature throughout a video is a way of pointing to an idea and letting your audience find the answer – something they love to do.

For The Sixth Sense, the colour red means danger and foreboding. It alerts the audience to something scary or evil about to take place, without them even knowing it, allowing the filmmaker to raise the tension of the scene.

But in the film Pleasantville, red means something vastly different. It is a movie that is shot in black and white, showing the initial limitations and somewhat bland nature of their current suburban lives. But with a change in the neighbourhood, new ideas flooding a willfully ignorant town, those who develop new ideas begin to show up in red. Red here is the colour of freedom, of joy, and of love – and it plays with the contrast between the characters who are at different stages of their journey.

But even if the colour is not a direct narrative tie, it is considered in all aspects to affect the emotional aspects of the film. Colour can:

It is usually a full spectrum of colours, like these screenshots from (LtoR) American Beauty, Juno, The Machinist, and Suicide Squad:

Light and Colour, when used by a video producer that understands not only how powerful they can be – but also how cost effective – can engage the viewer to the degree that it will influence their buying habits, and possibly change their minds, as well. If you are looking for a company that will use every technique possible to deliver something that works for both you and your budget, give BuzzMasters a call.

What does colour mean to you – do you find you love different colours for different reasons?

Do you notice the colour schemes in videos? What are some of your favourites?

Please log in again. The login page will open in a new tab. After logging in you can close it and return to this page.